Home > About Us > ALA 25th anniversary > History

Please click on the below story titles to navigate this page.

In June 1994, the APLA newsletter announced that the national organisation was fully incorporated and that the state branches in Queensland and South Australia were formally constituted. By this time the APLA already had 124 members from all across Australia, and state convenors were working hard to fight for plaintiffs' rights.

Many of the early state convenors are still ALA members today — Peter Carter (Qld); Nick Xenophon (SA); Sukhwant Singh (WA); Angela Sdrinis (Vic) and Catherine Henry (NSW). Our thanks to these ALA members who were so critical in the early days and have continued their commitment.

Click here to read the full newsletter from June 1994.

Peter Semmler QC was the first ALA (then known as APLA) national president. Peter had the job for four years — from 1994 to 1998.

The other first national office bearers for the organisation were:

Thanks to their hard work and enthusiasm, the organisation grew quickly and by the end of 1994 we had 210 members. Peter, Rob, Nick and Angela are all still ALA members today — thank you!

See below for an extract from Peter Semmler QC's President's Message in the first APLA Membership Directory, produced in 1994. Click the image to enlarge. 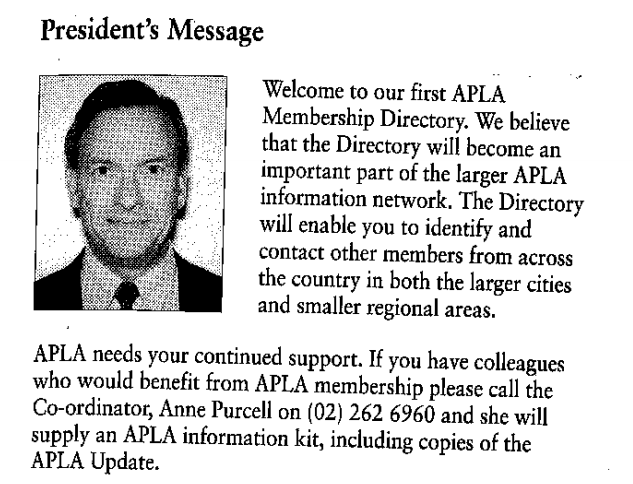 Women in the ALA

At end of 1994 just 36 of the ALA’s members were female — some 16 per cent of our overall membership. Female participation in the ALA is very different today, with women making up 50 per cent of our 1,300 members.

Although women featured prominently on state and national committees, it was 2008 before the organisation had its first female National President — Clara Davies. Since then we have had three more female presidents: Geraldine Collins, Laura Neil and Noor Blumer.

The ALA's links to the USA

The ALA was originally modelled on the Association of Trial Lawyers of America (ATLA) which is now the American Association for Justice (AAJ). ALA members have been regularly attending ATLA/AAJ conferences in the US ever since the ALA was first formed.

In 1994 Peter Carter (National President 1998–99) attended his first ATLA conference. ‘Experiencing the enthusiasm, commitment and creativity of ATLA members was invaluable’, he said of his experience. Interestingly one of the key topics on the agenda that year was institutional sexual abuse. Read Peter’s full report on the event, transcribed from the February 1994 issue of The APLA Update, here.

Another ALA member at the time, Michael Hogan, then Director of the Public Interest Advocacy Centre, wrote a long report for the April 1994 issue of The APLA Update reviewing his experience of attending the 1993 ATLA Annual Convention in San Francisco. The Convention had 3,500 participants and Michael concluded his report with this comment:

'The lesson of ATLA is clear, notwithstanding the immense pressure among individual plaintiff lawyers and law firms to compete for business, their common interest in delivering the best service possible to their clients compels them to take collective steps to match the resources of the industries, the government agencies, the corporations and their legal teams who they take on. The scale might be smaller in Australia, but the imperatives are the same!'

The ALA's first National Conference was held at the Sheraton Resort, Noosa in October 1996 with Peter Carter as the Chair of the Conference Committee. More than 300 people attended the event including delegates, speakers, sponsors and partners. Some of the speakers and session chairs from the 1996 Conference are still ALA members today including Peter Semmler QC, Peter Carter, Dr Peter Cashman, Rob Davis, David Hirsch, John Gordon, Patsy Toop, Catherine Henry, Nick Xenophon, Sukhwant Singh and Bill Madden.

Three international speakers were key drawcards at our inaugural conference: Howard Twiggs, now deceased, was the President of the Association of Trial Lawyers of America at the time; David B Baum from California spoke on demonstrative evidence; and Richard Lawrence came from Ohio to present a session titled ‘How to Maximise Awards in Medical Malpractice Cases’.

The Conference was widely considered a great success.